Villas and holiday houses in Umbria

Book your holiday in Umbria at La Porta Vacanze! You will stay in a villa or holiday house in the middle of the green landscape with views over rolling hills with vineyards, olive groves and sunflower fields. A villa in Umbria can be both small and intimate as a large and luxurious mansion. Anyway, guests will enjoy an extraordinary experience in a house which they all have all exclusively. Take a dive in your private pool, take a stroll in the garden of your villa in Umbria and enjoy the beautiful views of the surrounding hills. At the end of your holiday you may send a little prayer to St. Francis of Assisi, that this wonderful part of Italy may yet remain untouched by mass tourism. View our wide selection of villas and holiday houses in Umbria or ask us every detail you like to know about one of the villas in Umbria.

View all holiday villas in Italy 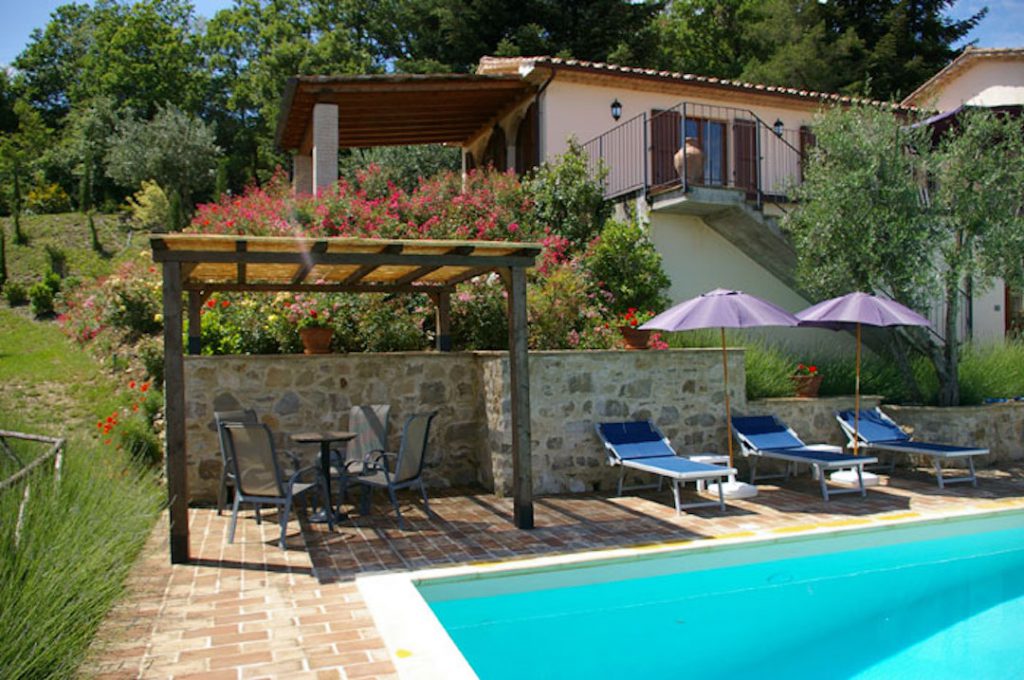 Umbria – The green hart of Italy

UMBRIA is also called the “green heart” of Italy. A magical green region of central Italy without a coastline, which is bounded on the east by the mountains of the Apennines that gradually turn into a lovely hilly landscape largely bordering Tuscany. See Umbria from the many medieval terracotta colored towns and villages, mostly on top of the hills. Beautiful views give a look of rolling hills covered with pastures, vineyards, olive groves, sometimes a small lake and forest, occasionally interrupted by the valleys. It forms a picturesque backdrop with a clean and clear air, the presence of many thermal and mineral springs, lakes and rivers teeming with fish. The many mountain towns in Umbria with their magnificent views are one of the most titillating throughout Italy. They spread out over the slopes of the hills, medieval, romantic and mystical and away from crowds.

Experience the real Italy in a beautiful villa in Umbria

During your vacation in Umbria, you can visit the largest lake in central Italy, Lake Trasimeno, to see the highest waterfall, the Marmore and walking at the source of the mighty River Tiber. Your villa in Umbria nestled in a hilly landscape interspersed with olive groves and vineyards, sunflower fields and groves of elm and chestnut, crossed by river valleys that connect the various national parks. For culture lovers a stay in a villa in Umbria means explore the mystical, sacred land of Assisi – birthplace of the patron saint of this region St. Francis of Assisi, explore the Roman origins of Spoleto and find the deepest Etruscan roots throughout Italy. The many artworks and archaeological sites and museums are rarely more than a short drive from your villa in Umbria. Additionally, you can find around your villa in Umbria many ancient traditions, including medieval village festivals that give your stay extra cachet.

This website uses cookies to improve your experience while you navigate through the website. Out of these cookies, the cookies that are categorized as necessary are stored on your browser as they are essential for the working of basic functionalities of the website. We also use third-party cookies that help us analyze and understand how you use this website. These cookies will be stored in your browser only with your consent. You also have the option to opt-out of these cookies. But opting out of some of these cookies may have an effect on your browsing experience.
Necessary Always Enabled
Necessary cookies are absolutely essential for the website to function properly. This category only includes cookies that ensures basic functionalities and security features of the website. These cookies do not store any personal information.
Non-necessary
Any cookies that may not be particularly necessary for the website to function and is used specifically to collect user personal data via analytics, ads, other embedded contents are termed as non-necessary cookies. It is mandatory to procure user consent prior to running these cookies on your website.
SAVE & ACCEPT